You’re probabably going to associate Still Alice with Julianne Moore’s stand-out performance. It’s no surprise given that she’s won every best actress award from the Golden Globes to the SAG (Screen Actors Guild Awards) to the Baftas. In a week’s time, she’ll be the unstoppable force at the Oscars, despite strong performances from all nominees. Yet, this film is so much more. Given the perception that movies on illness and family bonds are dull and bland, people might just miss this all important film that sheds light on a matter that we so often misconceive.

Julianne Moore (Alice) is no doubt, at the center of this family drama. As debilitating as her disease might be, the film however is not melodramatic over her mental decline. It’s touching and excruciatingly realistic. Some might point out that the film was shot in quite a static way, with most shots framed around Alice and in close-up view. But let’s be honest, the movie didn’t set out to dabble with the artistic. The simple way in which the movie was shot allowed Julianne Moore to shine as Alice, her emotional progression alone gave the film an element of veracity. There was simply no need for superficial technical additions that would otherwise have ruined it’s candid tone.

It is painful to watch Alice’s early on-set of Alzheimer’s take effect slowly at first, then completely all at once. What’s even more ironically tragic is the fact that Alice is an established researcher and professor of Linguistics at Columbia. Having to deal with struggling with the very thing she excels in, one can only imagine it being psychologically torturing. In daily life, total memory loss is foreshadowed by little slips of memory. She mispells common words. In the two times she ran, she couldn’t recognize a nearby place in the former, and completely forgot that she had a dinner appointment to attend instead in the latter. Soon, she can’t even form coherent sentences. Despite the challenges that she faces, the suportive family unit provides a source of comfort for both our protagonist and for us. 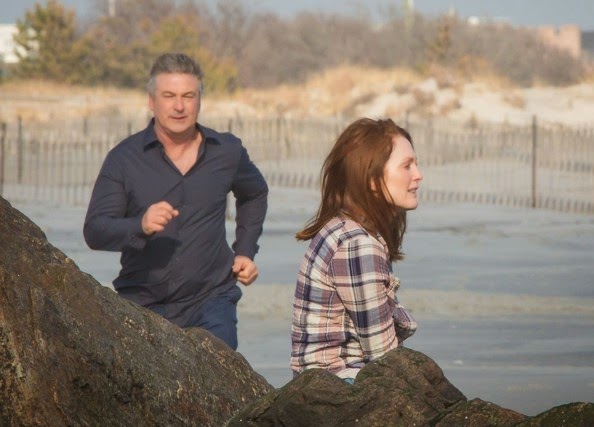 Alec Baldwin plays the intellectual and supportive husband whose caring presence is never pretentious. Their three children make up the rest of the family, all of whom are rather normal. The one who is the most thematically significant is Lydia Howland (Kristen Stewart) who is seen with Alice the most. She’s a young theater actress who tries hard to understand her mother’s condition and be understanding despite several unintentional mistakes by Alice. Lydia’s decision to refuse taking the Alzheimer’s detection test along with her insistence at competing in theater shows a certain degree of fortitude; Whatever challenges may come her way, being afraid to face them is the last thing on her mind. Thematically, her strength will help Alice through trying times.

In the most emotional part of the film, Alice presents a speech about her experience at an Alzheimer’s conference. This for me, encapsulated everything about Alice in fascinating ways. Her decision to present reflected a strong sense of personal will. Her speech was a bold attempt to prove her worth, and simply shows that despite her disabilities, she still takes pride in showing her linguistic abilities. She finds ingenious solutions like highlighting previously read lines to prevent re-reading. And depite her dropping her speech notes on the floor, she expends all her will to get up and deliver her speech with verve and inspiration. Julianne Moore perfectly captures the woman whose disability will never destroy her self-rootedness and identity. In a poignant last scene, Lydia reads a pretty long section of a play Angels in America to her mother. When she was asked what the play was about, Alice whispers ‘Love’.

Still Alice may not pack as much pizzazz as some of the other films, but it’s a perfect portrayal of Alzheimer’s and its effects on the affected and the family. It’s not something that’s as simplistic as one might think. Feelings and emotions are still accessible, but recalling gets problematic. Julianne Moore depicted the complexities of Alzheimer’s convicingly and with integrity. By not dumbing down the emotional aspect, we see that as Alice’s intellectual capabilities diminish, her emotional connections with her family not only become deeper, but also help her find a much needed sense of self and worth.

Hard hitting and realistic, it’s a movie I highly reccomend.