I’ve finished giving my verdict on most of the other awards i.e Acting, Director and Cinematography in the lead up to Oscar Night. There’s still a little more till I conclude my Bear Awards for 2015 and I hope you’ve had as much fun as I have doing this. It seems like the Bear Awards has been quite a success, many of you have liked and voice your opinions and meaningful discussions have evolved. You can bet the Bear Awards will make a come-back at this time next year so stay tuned. Little Bear (my mascot for the awards, named after the DiCaprio scene in The Revenant) is brimming with joy because of all the support you’ve given and will work hard to review movies for the year ahead 🙂

So now we come to the tail end. By now if you’ve been following my very own ‘awards season’ haha ;), you already know my taste. Well, let’s get to it!

Some people may not have liked it and it’s message may not have resonated, but I liked it so it’s here. It’s supposed to be an original screenplay, but it was ‘adapted’ from its own sound play, so it’s considered adapted screenplay…kind of like last year’s Whiplash. Anomalisa’s central themes and conflicts revolve around the banalities of modern life and conveyed it quite spectacularly on screen. It is like nothing I’ve seen before.

Beasts Of No Nation

Beasts Of No Nation is adapted from Iwodenwa Uzeala’s novel of the same name. Depicting the conflicts of civil war in an unnamed African country, it succeeds not only in showing how the experience is pervasive but also how the violence is systemic. Told solely through the eyes of a young teenage boy, this is a shift from most war stories where the focus on politics and wide-scale conflicts make the experience more removed. Beasts Of No Nation targets the unpainted canvass of a child’s mind, and let’s violence shape the perception in ways that are more intimate, personal and tragic.

Emma Donoghue’s novel at first glance seems too difficult to adapt into a film. Needless to say, she was very careful with who she wanted the director to be. Although Room is ultimately an uplifting experience, I think many mistake it or being a simple story. It’s far from simple. Handling the difficult issues of confinement and adaptation, Lenny Abrahamson and Donoghue have created a hugely cathartic journey born from being true-to-life and uncompromising in portraying the difficulties in shifting from captivity to freedom. And most of all, it grounds everything in everlasting love which just tugs at your heartstrings *sobs*. So heartwarming.

Aaron Sorkin won this category in the Golden Globes. It’s not hard to see why. His script is ferociously charged with back-and-forth dialogue that it feels like bullets going off non-stop. It’s intense and never backs down for a second, which resembles Steve Jobs himself. In an attempt to exemplify the elusive man’s qualities both good and bad, Sorkin’s script goes even beyond that to the point of making the tech legend larger than life itself. But I don’t mean that in a bad way because you’ll realize that the man’s flaws,not his successes, that eventually motivates him to be more complete…which in turn makes him more human. Sorkin’s script takes us from one end to the other without being contradictory or disjointed at all. Bravo.

In my view, The Big Short is overrated. It’s pretty decent but it’s nowhere near awesome. The scripting is a different story. Although the break-the-fourth-wall scenes that used Ryan Gosling, Selena Gomez, Margot Robbie etc (most of whom only served for this one purpose) felt random and too try-hard, it used a variety of other techniques to simplify a difficult concept. The dialogue was really good and hilarious. If only it had simply focused on cutting away the unecessary explanations and solely targeted at what it did so well which was wit and comedy, it could have been so much better.

Beasts Of No Nation

Winner: Beasts Of No Nation

There’s something so riveting about the whole movie. It’s also a new perspective on war. The genre normally feels either too overwhelmingly dramatic or underwhelmingly shallow that barely scratches the surface. Have a look from a child’s perspective. It’s a whole new experience that’s harrowing and traumatic, but there might still be a glimmer of hope for the young souls purged in conflict.

Ex Machina just rocks. ROCKS ROCKS ROCKS. I’ve said so much in previous posts that what I say now feels like it’s been repeated. But anyhow, for the benefit of those who haven’t seen them, I thought the script…dammit the whole conception of Ex Machina a hell of a story. Shifting away from the notion that science fiction movies have to be high on action, CGI, special effects and must always and indefinitely include a hero…Ex Machina instead roots itself in interaction and relationships between man and AI. There’s alot of discussion about it’s various themes, and dammit it’s always a pleasure talking about it because it’s so complex and open to interpretation…just know that it’s something truly amazing. Head over to here if you wanna see my review and many interesting analysis of the movie in the comments section. Thanks Erin and everyone else for the intellectual discussions HAHA!

This category’s really tough. Inside Out proves its a mean competitor for original screenplay. It’s a wonderful big-hearted film filled with endearing characters. What’s really impressive is that it has very meaningful insights into the human psyche and proposes to tackle difficult issues without alienating the group for which it set out to entertain. A film for both kids and adults, Inside Out’s message actually helps you go a long way in life; Sadness is just as crucial as happiness. Never supress it.

I don’t need to say much here. This is one of the most important films of 2015. It’s not flashy or showy. I didn’t find it particularly ground-breaking or stellar. But it tackled a subject matter in the best way possible. Without getting embroiled in judgement and bias, Spotlight didn’t dramatize nor judge. It only revealed. And that, my friends, is why Spotlight is such a powerful film. Kudos to the writing team behind Spotlight for bringing breater awareness and bravo to the actual Spotlight team that exposed the very institution that has misused the name of religion and corrupted the fabric of community and the lives of the innocent and the young.

Tangerine’s my second best movie of the year. I encourage you to watch it if you haven’t because it’s a film like none other. I know some people didn’t really enjoy it as much as I did, but it’s alright. Tangerine really spoke to me even though it’s main story is an experience quite removed from the most of us. Spotlighting the transgender community in L.A, this riotous, outrageous and foul-mouthed sassy bitc*** film starts off ridiculous and light-hearted that somehow ties all it’s different ends together. When all is said and done, the script’s more silent and toned-down end hits you hard…I mean real hard.

I watched this about a week ago but it was released sometime in the middle of last year. It’s a very VERY obscure little film so I’m not surprised if most of you haven’t heard of it. But if you can (not encouraging anything 😉 ), there are ways to find the film on the net. It is a really good film about survival. Set mainly in a post-civilization world, a man whose been living alone for a while now suddenly finds two women, one old and one young, knocking at his door. What they do to survive and the doubts,fears,feral instincts and treachery that can’t help but fester, as food becomes more scarce and relationships are formed. It’s an extremely insightful and provocative film, so take it as a plea, please check it out!!!!!!!

I might do a review on it, depending on how soon I finally wrap my head around which of the many ideas the film is actually trying to show. Super intriguing stuff. 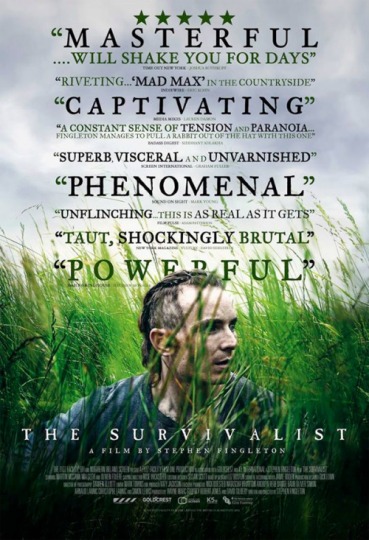 No film is more ingeniously created than this one. I had a tough time picking, all five were so deserving in their own right. But Ex Machina had that something extra for me.

Bear lookin’ all cool here, posing with the books. Little Bear doesn’t realize that adapting a screenplay takes more than just posing for the cameras!!!

“Shhhhh, I’m doing a promo shoot!” “No silly, I’m not adapting! I’m going to combine all four books and make an original screenplay!”

Hmm, Little Bear might be out of his depth here, clearly not worrying one single bit about how it’s gonna work out. *poses for the shot* 😜