Terence Malick’s name evokes equal amount of love and hate. This is a man whose style does not pander to the tastes of his audience but rather, imposes his own unflinching style. I haven’t seen any of his movies but surrealist elements and cryptic messages about life typifies his filmography. His last film, The Tree Of Life was already divisive enough. Some called it a masterpiece in metaphysical art, encompassing all of life microscopic and universal; Others felt it was a overly-experimental film that expected its viewers to make sense of a multitude of random scenes. Lush photography. Fragmented message.

Take the worst parts of his films, multiply that into an infinite amount until any last shred of meaning is sullied by its own art and the moments on screen become a laborious disaster. What’s with the tarot card theme? And the preachy theological voice-overs about how life is meaningless and yet full of meaning at the same time? Christian Bale hardly speaks more than 50 words and most of his scenes show him just moping around with an expressionless face, expecting to evoke something out of nothing? There’s a whole host of disjointed and downright awful aspects in both filming and acting, not even Lubezki’s cinematography could save this mess nor could Cate Blanchett and Natalie Portman’s short screentime give life to the film. If Malick’s film has succeeded in something, it’s that it’s damn straight as chaotic as he projects life to be, meaningless, vacant and drifting along it’s meaningless existence. That in itself becomes a failure.

I’d like to see a sliver of redemption for this movie but it provides none. I know some like the film’s stream of consciousness approach but there’s a limit. Malick takes it way too far this time and breaks not just boundaries but also his own film. From the start, a plethora of disconnected images flash before your eyes, you want a scene to stay longer but the film won’t give you that. Enter Christian Bale’s character whose name I still do not know. He’s a screenwriter of sorts, a man whose frivolous sexual escapades are clearly the product of his own transgressions but no…a voice-over resembling that of a 17th century mystic spins a tale about how he’s like a ‘prince’ whose lost his way, fallen into a dream and forgot his task of retrieving a pearl. Amusingly appaling. Pearl? You’ve got to be kidding me. I’m not trying to sound condescending here but if you’ve studied lietrature (or not), you’ll know that one does not simply include a metaphor without making significance of it. There’s nothing to connect any of the metaphors to the main story. Oh no, the whole charade isn’t over.

Enter the endless shots of our great big world: Vast desertlands, northern lights that cascade over the earth, moving life in the city, more vast desertlands, dogs trying to retrieve something in the pool, people walking aimlessly on the beach, roadtrips and even more roadtrips with Rick (Christian Bale) and unnamed girls having a blast…cue the greek chorus voice-over about how he’s lost his way etc etc. I get it, life is a mess. You want to shoot it an a stream of consciousness manner. But it’s as pretentious as it can get. All the while you’re hoping Rick can pull himself out of his void aka meaningless existence with hot chicks,money and parties. But he doesn’t. There’s scenes of poverty-stricken people lying on the streets; Rick just walks past them, occasionally giving forced half-sympathetic faces. Now some films are courageous, some are outrageous but Knight Of Cups is just defiantly preposterous.

As I watched Malick’s ploddy shoddy art, I can’t help but ask myself what was the point of the movie anyway. Even if he wanted to show life as is from life itself…to strip away everything and just let life tell it’s own story, Knight Of Cups served only to alienate itself. It strips away from conventional movie-making but then to compensate for the lack of substance, it forces actors to be natural but be as minimalistic as possible. That is an exercise in futility. Even Christian Bale himself has said he was very frustrated and confused while acting as Malick would ask actors to just act out whatever they wanted in scenes like the beach scene. It’s no wonder that he was roving around randomly, trying to be spontaneous when it ironically defeats the very idea of spontaneity. Terence Malick, I’m afraid, has lost the essence of his own art by trying to be too artistic.

Watch Knight Of Cups if you can’t find another way to kill time. I went in hoping for some transcendant message and I left feeling utterly cold and uninspired. A tale weaving in all the world’s message and meaning in a rich man’s struggle to find meaningful existence is utterly insane. The film can’t get enough of itself and expects us to indulge in this metaphorical journey, with a faux pas all-seeing voice that narrates how we’re losing our soul. The film is saying ‘oohh look at how this guy is like a fabled prince, oooh look how important his journey is.’ Journey? My goodness. Think it can’t get worse? There are tarot cards and cut-to-black scenes with words like ‘The Moon’ and ‘The Tower’- There are plenty more WTF moments. It’s also filled with an excess of material and carnal imagery and an equal amount of scenes with the protagonist ruminating with inaction and languishing in his own ennui-No, there’s no way to sympathize or even form any sort of connection here, it’s quite simply a much ado about nothing. In the end, I can’t find any positives for the film. It’s really really shallow and pretentious, to the point where it gets unpleasant. No film has got me to grimace for the entirety of its running length, which seemed to go on for hours on end without being anything at all. 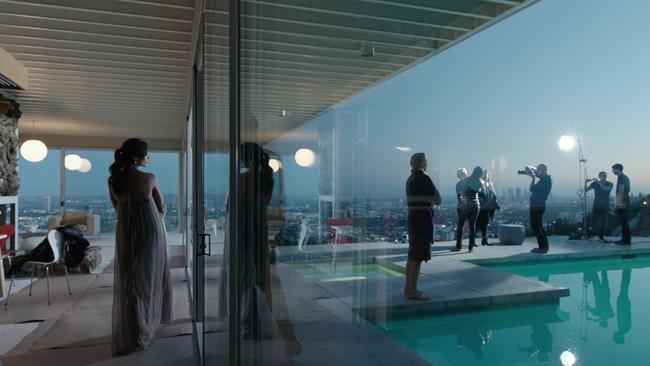 If you’ve been reading my reviews, I hardly give a bad review.Granted, I haven’t reviewed many bad movies. But even as I watch something I hate, I always find something I can credit the film for. There’s nothing here to credit because it’s a movie that doesn’t show anything or become anything. It’s just bad,really bad. Put on a slideshow with 10000 images of random things, add in many derogatory images of nude women, clothe the men to the max, add images of deserts, rocks, water and buildings… click shuffle, that’s essentially what this film feels like. I don’t even want to go into the whole sexist nature of the film because it’ll take another essay to write, and I’m sure many have already written about it. This is the worst movie I’ve ever seen. Period.