Denzel Washington quotes playwright August Wilson among giants of American literature as he went up to snag his award for best actor at the Screen Actors Guild awards. As a lover of literature, I was naturally excited when I found out that Denzel Washington and Viola Davis had performed the real play before they adapted the source material to the big screen. The result of this rare birth of stage-to-film is a scaldingly tense drama, brutally underscored by the harshness of poverty and those left behind by the American Dream. Fences, in some ways, is a foil to Arthur Miller’s All My Sons which is about the failure of the American Dream for the ones who have achieved it. I haven’t seen the actual play but I think it’s very close to the original. Fences retains all of the character-to-character back and forths, monologues are lengthy and verbose, and it’s less of a cinematic experience and more a film sticking to its stage roots. I cannot and will never relent to anyone who says Fences (or any other play-to-film adaptation) is ‘over-acted’, ‘too talky’ and ‘too forced and unbelievable’. You can’t pick at a film for trying to adapt a play in the best possible way it can…which is to stick to its source. As far as I’m concerned (and I hope a majority of people who love plays and literature would agree), I’m glad we get films, rare as they may be, that bring the lyricism and beauty of a play to the big screen with minimal changes to its original style and design. Films like that don’t have to pander to mainstream cinema. If it did, then that would be the real tragedy.

Directed by Denzel Washington himself, Fences can be mistaken for a pretty bland looking rookie attempt at directing. But I defend the guy. I appreciate how the ‘stage’ look is preserved as Denzel finds spots where we can observe the interactions between characters in a very straightforward way. The straight-laced unassuming style places less emphasis on the director and cinematographer and spotlights the action rightly on the actors, who are at the heart of August Wilson’s ferocious spectacle and satire. Denzel and crew definitely know when not to mess with uneccessary abstractions and style and sometimes as he himself has stated, the best way is to simply ‘place a camera somewhere and just film it.’ Denzel is brilliant in his long and loud monologues that characterize everything about his character; Even ramblings like ‘death ain’t nothin’ but a fastball on the outside corner’ and the subsequent ‘Ain’t nothing wrong with talking about death. That’s part of life. Everybody gonna die. You gonna die, I’m gonna die. Bono’s gonna die. Hell, we all gonna die.” is testament to Troy’s realist outlook. The mix of joviality and resignation in his diction is perfectly intertwined in Denzel’s performance, giving us a character who withers away in the face of change, making light of his regrets in the only way he knows to deflect his pain.

But Fences is nothing without Viola Davis. Viola’s Rose makes the other half of the family and her supportive and motherly role is heart-warming at first and heart-breaking as the film progresses. Like a shadow behind her husband, Rose breaks out of her submissive image, her motherly figure belies an ocean of lost dreams and sacrifice. Viola Davis is heartbreakingly moving. There is a scene,among many great scenes of hers in the film, where she sends shockwaves through your body and makes your hair stand. It’s a stand-out moment in an already fantastic movie; A tender and true moment that speaks to everyone in the audience. 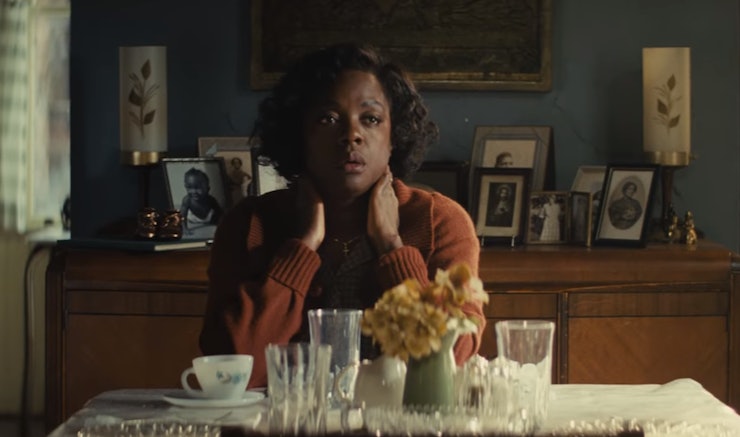 Ultimately, Fences is not simply a well-acted piece of work. Viola Davis and Denzel Washington duo dynamic is shattering and transcendant; Just as there are no barriers between the stage and its audience, their sheer acting force makes it easy to forget that we watch them through a screen. But let’s get real. August Wilson’s play is essentially a realist kind of play. It’s a simple American story about simple American households and their struggles in this not-so-simple world. Wilson’s characters are mainly Black and he makes no bones about his subject matter here. From the vernacular to the constant references to racial injustice, racism and inequality, Fences is very much a universal story with a personal tone. But moving bey0nd the said themes, it is a healing and restorative experience for all the hustlers out there. For even as the world is raining down upon us with the winds of unjust fate, pre-destined afflictions, tragedy, heartbreak and ‘death’ waiting on the other side of your fence, Fences is a life-affirming reminder that there is still life to be found and joy to be had.

Rating: 9.4/10 I felt like I could have said more, but I don’t want to turn this into a literary analysis. That would have completely spoiled the whole movie and I definitely do not want that. Everyone, please make a trip down to your local cinema and catch this.